Benefits of ESOP Options for Architecture, Engineering and Construction Companies 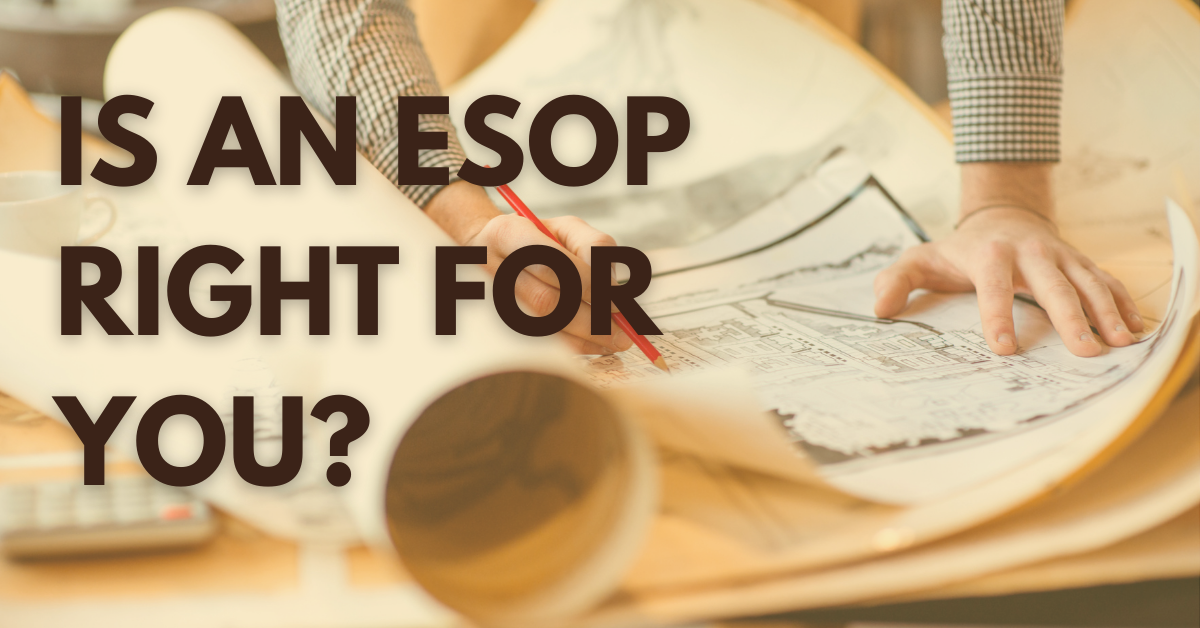 Planning an exit strategy from your successful architecture, engineering, or construction (AEC) company can be difficult at times. Though options abound, one that many companies fail to consider is an Employee-Owned Stock Ownership Plan or ESOP. This type of plan can have outstanding benefits for both employees and owners.

With about 6,500 ESOPs in the United States covering 14 million employees, ESOPs work well for small to midsize companies that have under 250 employees and sales averaging $20 million to $50 million annually. Though ESOPs exist in a number of different industries, construction and engineering are some of the best sectors that can successfully implement this exit planning option.

Much like a 401(k) or profit-sharing plan, ESOPs are considered a tax-qualified retirement plan subject to the Employee Retirement Income Security Act of 1974 (ERISA) requirements. The biggest difference you'll find between an ESOP and another tax-qualified retirement plan is that an ESOP has to invest in the business' stock. It provides the owner a great option for rewarding employees that have been loyal while transferring ownership to them.

How Do They Work?

The ESOP trust must be formed by the business with a trustee who is typically independent of the business. All or a portion of the company is purchased by the ESOP from the owner or owners following an appraisal. In many cases, money must be borrowed from an outside lender by the business, with the proceeds from the loan immediately distributed to the ESOP as an internal loan.

This allows the ESOP to immediately purchase the interest or shares in the business. This has to happen in a two-step process so that your outside lender can avoid compliance problems with loan requirements under ERISA.

If the purchase is only partially financed from outside sources, the seller or owner can fund the remaining interest using seller or owner notes calling for a reasonable interest rate while remaining subordinate to the outside financing. However, because of this form of funding the ESOP provides a favorable rate of return, many owners find this type of financing appealing due to the extra income off of the interest.

Much like how a business makes contributions to a 401(k), the company will have to make tax-deductible contributions annually to the ESOP. That contribution gives the ESOP funds so that it can repay the loan the ESOP has in place with the business itself.

While the ESOP is paying down the internal loan to the business, the shares purchased by the ESOP are kept in an account within the trust. As the loan is paid down, shares of stock are released from this account to be allocated to employee accounts of those that are participating in the ESOP.

ESOPs are a great way to create internal markets for interest or shares in the business, giving the owner an option for liquidity. They provide a range of tax incentives and tax deductions, with the owner able to defer the transaction's taxes in many cases. Shareholders in a C corporation can defer taxes by reinvesting proceeds into the securities of outside domestic companies. S corporations and partnerships may be changed into a C corporation prior to the sale for the same tax-deferral benefits.

Is the R&D tax credit right for construction firms?

ESOP-owned businesses also keep their culture post-sale and retain employees for longer. They also align the employees' and owner's interests. Having a stake in the business motivates employees to be accountable and improve profitability.

Does an ESOP Make Sense for You?

There are many considerations to take into account to ensure the ESOP you create will work well for your business. This includes continuity of management, evaluations of preexisting debt, the willingness of the owner to accept appraised fair market value for their shares, and the legal limitations on how much can be contributed to the ESOP every year.

Want to know about ESOPs and what they can do for your company?